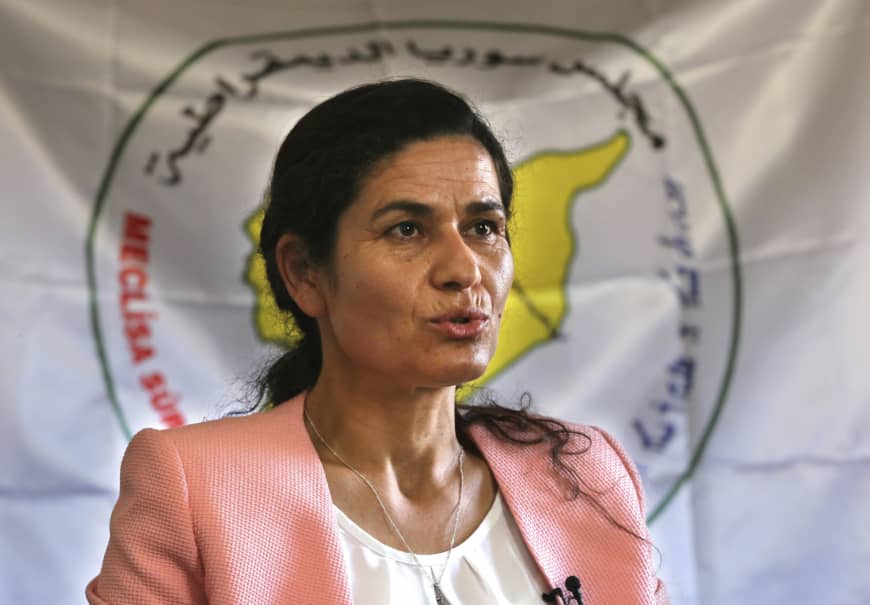 North Syria at a Crossroads

The territorial defeat of the Islamic State in Syria by the global coalition led by the United States and the Syrian Democratic Forces heralds a new era in American and Syrian relations. What are the implications of a drawdown of U.S. forces in the region?   How will an insurgency by ISIS be thwarted? Without security, how can refugees and internally displaced people return? If there is to be safe zone in northern Syria, how will it be configured? How will reconstruction of Syria proceed? How will the ongoing threats towards the communities of the Syrian Democratic Council be addressed? The YPG/YPJ won the ground war against ISIS, but can the Syrian Democratic Council win the peace?

co-chair of the Syrian Democratic Council

Ilham Ehmed:
Ilham Ehmed was born in the Kurdish city of Afrin in Rojava, Syria.  Ehmed has part of the Kurdish struggle for freedom since the 1990’s, with a particular focus on women’s rights.  Ehmed was also a founding member and Movement for a Democratic Society (TEV-DEM), and currently serves as co-chair of the Syrian Democratic Council (MSD), a coalition of multiethnic organizations representing the peoples of the federal region of northern Syria.  As an active member of the Syrian Women’s Initiative for Peace and Democracy (SWIPD), a network of civil society organizations from inside and outside of Syria, Ehmed participated in a number of international conferences on women’s issues.

David L. Phillips:
David Phillips is the Director of Program on Peace-Building and Rights Institute for the Study of Human Rights at Columbia University. Phillips has worked as a senior adviser to the United Nations Secretariat and as a foreign affairs expert and senior adviser to the U.S. Department of State. He has also authored many policy reports, as well as more than 100 articles in leading publications such as the New York Times, Wall Street Journal, Financial Times, International Herald Tribune, and Foreign Affairs.  Author of several books, his most recent is “The Great Betrayal: How America Abandoned the Kurds and Lost the Middle East”.

Amy Austin Holmes:
Amy Austin Holmes is a Visiting Scholar at Harvard University, a Fellow at the Wilson Center, and an Associate Professor at the American University in Cairo. She completed her PhD at Johns Hopkins University and is a former Fulbright scholar in Germany. Her research focuses on the intersection of contentious politics and security issues, broadly defined.  Her book “Social Unrest and American Military Bases in Turkey and Germany since 1945” was published by Cambridge University Press; she also directed an accompanying documentary film. Having spent a decade living in the Middle East through the period known as the Arab Spring, she has published numerous articles on Egypt, Turkey, Bahrain, and the Kurdish regions of Iraq and Syria. While at the Wilson Center, Dr. Holmes will be writing a series of articles on the emergence of Kurdish and Yezidi militias in northern Syria and the Sinjar mountain region of Iraq in response to the Islamic State.

Nicholas Heras:
Nicholas Heras is a Fellow at the Center for a New American Security (CNAS), working in the Middle East Security Program. He is also a Senior Analyst at the Jamestown Foundation, a Washington, DC-based global research and analysis institute. His work focuses on the analysis of complex conflicts and security issues in the greater Middle East and North Africa and trans-Sahara regions, with emphasis on timely, relevant, and actionable analysis on developments on the civil wars in Syria, Iraq, Libya, and Yemen.

Mutlu Civiroglu is a Washington-based journalist and Kurdish affairs analyst with more than 15 years of experience focusing on Syria and is a Washington-based journalist and Kurdish affairs analyst focusing on Syria and Turkey. In 2009, he joined Voice of America as a radio and TV Host.  He is the editor of the Kurmanji website for VOA Kurdish and the host of the weekly Kurdvizyon TV show airing on Ozgur Gun TV in Diyarbakir. He has reported stories in Voice of America, The Guardian, HuffPost, Vice, International Business Times (U.K.)

All attendees will receive a valid QR code via email to pass through security gates at the entrance of The National Press Club.

This event presented by the American Rojava Center for Democracy (ARCDEM)